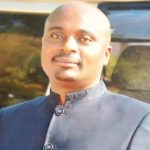 How I was delivered to serve God.

KAVC 4 Jesus church, the battle is over was transformed from KAVC Chapel on July 14, 2018. On this day, the holy spirit came upon James Asiimwe the founder of KAVC Foundation. According to the world view, James was mad from July 14-16, 2018. For three days, James lost control over his mind and run across the village shouting “KAVC 4 Jesus, the battle is over”. He rolled himself on the ground and broke door glasses for his office which left big wounds on his right hand. He also spent several hours shouting that Wabiyinja village where his KAVC Foundation is located got delivered and declared KAVC as a holy place. Other words he kept repeating for three days were that “the whole world must know that KAVC is for Jesus”.

On the first day of July 14, many people who gathered around James while he was out of mind, included local village officials. These officials called in Uganda police officials to come and help rescue the situation because James had become uncontrollable. Police men from Lwemwede police post in Masulita came quickly and tied James with arm chains. They took him to the police post where a letter forwarding him to Butabika hospital for mad people was quickly written.  James was driven to this hospital but before they could arrive, his wife Miriam Asiimwe changed the plan and instead took him to Busunju Elim Church where he captured another show. He was prayed for and after church congregation had dispersed, James remained in the same church still unconscious until late.

When James seemed to have regained his mind, he was taken back to KAVC Foundation Wabiyinja in the evening. On arrival, he again started the same business as he had been since morning. He entered the chapel room at KAVC and started declaring it as his church and that the battle was over and that the whole world must know KAVC 4 Jesus. At this time, many people including his relatives from far and wide had arrived. The situation became worse as this is when he jumped, took off very fast and started breaking door glasses at KAVC school.

A decision was made and James was taken to Lubaga Miracle Center Cathedral where Pastor Robert Kayanja prayed for him. This was also the time when James was taken to Lubaga hospital to nurse his wounds. This night in the hospital will always be remembered by his brother Manasseh Twinokusiima, Micheal Amanya, Gerald Tindyebwa, Ivan Kasaana, Sharon Kyomuhangi and Ruth Kasaana. They spent a full sleepless night struggling with James who was too strong and uncontrollable. They were protecting him from causing further injury to himself and to others.

The following day, James was overpowered by sleep drugs/injections which left him a sleep for about 14 hours. On that day night, he was returned to Miracle center cathedral where Pastor Kayanja again prayed for him. It was then that James regained his mind and was able to speak. Many people saw him on Television Channel 44 for the same church testifying for Jesus. James and his friends/relatives above remained at the church until the next day when they fully confirmed that James was fine. He was then taken back to KAVC where everyone including the police were surprised to see him in a normal state. Everyone shouted indeed KAVC 4 Jesus, the battle is over.

While the world saw James as mad, for him it was a different story. To James, it was his deliverance time and his final call by God to serve him. No wonder, when he was mad for three days, all that could be heard was KAVC 4 Jesus, the battle is over and the whole world must know that Jesus is alive”. The battle of struggling with the devil which had failed him to listen to God’s call  for 40 years was now over. During the 3 days of his deliverance, James was given a life assignment by Jesus. He was assigned to make sure that all battles that people fight with the devil must come to an end. People in the whole world must know when they accept Jesus as their personal savior, they win all their battles with the devil. During this time, James was called to be an Apostle who must spread the gospel far and wide. He was tasked to start by making KAVC a holly place where all people will be delivered from their battles with the devil. This is why his first church as an Apostle was established at KAVC and named “KAVC 4 Jesus church, the battle is over”. It will also be his home church where he will always be when he is not on apostle missions.

To James, what happened to him was just like it happened to Apostle Paul on the day he was converted to Christianity. When the holy spirit came upon him, he fell down on the ground and could not see properly.

Acts 9:3-4. As he neared Damascus on his journey, suddenly a light from heaven flashed around him. He fell to the ground and heard a voice say to him, “Saul, Saul, why do you persecute me?”

Similarly, on the day of Pentecost when the holy spirit came on the apostles for Christ, they started speaking in tongues as if they had become drunk.

Acts 2:4 They were all filled with the Holy Spirit and began to talk in other languages, as the Spirit enabled them to speak……13 But others made fun of the believers, saying, “These people are drunk!

Apostle James was very lucky to be chosen by Jesus Christ and he is already executing all the tasks that he was assigned during the 3 days of his deliverance.

Is the devil battling you? KAVC 4 Jesus, the battle is over.