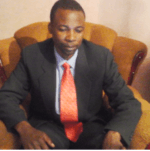 Zimbabwe is a country with over 14 million people. There is a mixture of Christianity and traditional African religion, that is a belief in spirit mediums where the dead are said to mediate with the creator [(musikavanhu), i.e., he that created humanity) on behalf of the living.

Taylor joined CLI in 2011 and completed the getting started classes, his getting involved with CLI was more accidental rather than deliberate, yet with hindsight providential, this chance meeting was going to have a profound impact on his Christian walk and character.