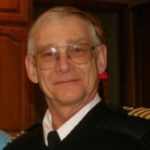 Last Name: Kenny Sallee
Type of Minister: Chaplain Minister
Ministry Dream: To provide pastoral care, as a Community Chaplain, to
those outside the church and by ultimately starting a Christian faith
mentoring and counseling center to the unchurched.

To provide pastoral care, as a Community Chaplain, to
those outside the church and by ultimately starting a Christian faith
mentoring and counseling center to the unchurched.

Ministry Journey: Kenny is married and lives in Oconto, Wisconsin, a
small community north of Green Bay. He is known in the area where he
lives as Cap’n Kenny. Together, he and his wife, Nancy, operate a small
charter/tour boat company on the Great Lakes during the summer months
and travel south during the winter months. They attend worship together
in a small ELCA Lutheran church in Marinette, Wisconsin.

As a child, Kenny grew up in California and was raised in the Baptist
traditions, although his family seldom attended church. His father
worked in the construction trade after he left the military, and the
family traveled to wherever his father could find work. Kenny attended
14 different schools before graduating from high school. After high
school, Kenny enlisted into the US Army and was sent to fight in Vietnam
shortly afterwards. He continued his military career after Vietnam
serving in the Continental United States and Pacific regions until he
retired after 23 years of service. After the military, Kenny has worked
as an electronics technician for the Federal Aviation Administration, as
an aircraft electrician for the US Air Force, and as a cross-country
truck driver for a national carrier. Kenny is now a US Merchant Mariner
licensed as a Ship’s Master (Captain).

Kenny’s current ministry is Chaplain for the military veteran service
organizations in Oconto, Wisconsin, where he lives. He also volunteers
as a visitation minister with a hospice organization in Northeast
Wisconsin, and with the VA Medical Center in Iron Mountain, Michigan.
Kenny also maintains an online ministry website where he shares the love
of Christ Jesus worldwide through daily devotions and lectionary
scripture readings.

Kenny started studying with CLI in 2015 and completed the Bachelor of
Divinity Degree with a Chaplaincy Emphasis in 2019. He is currently
working towards a Master of Theological Studies Degree at Nations
University in New Orleans, Louisiana. Kenny is ordained through
Christian Leaders Alliance as a Chaplain Minister.

Kenny is willing to mentor new CLI students and graduates in the
Northeastern Wisconsin/Michigan Upper Peninsula area. He will also
assist them in the ordination process with the Christian Leaders Alliance.