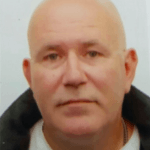 To raise up revival leaders in Africa. To serve the Lord in missions.

Linsay is from UK and is married to Rachael, a Kenyan. They have four beautiful daughters, 2 of which are married to pastors in the UK.

He was brought up in the church and made a personal decision to follow Christ at the age of 6, was baptised at 9 and filled with the Holy Spirit at the age of 14. Also when 14 He received the call into ministry. At 18 He attended Bible College for 3 years and then entered the ministry.

Way back in 1982, He felt the call to come to Kenya as a missionary. However, life happened. He got married and had children. Sadly, he experienced divorced years ago. However, God used this as a catalyst to bring many changes into his life, including healing and new direction.

This new direction included Africa. Linsay enrolled at Christian Leaders Institute in 2017. He was ordained as a commissioned minister in 2018.

He will willing to mentor student and graduates in Tanzania and parts of Kenya. He is willing to help those who seek ordination with the Christian Leaders Alliance.