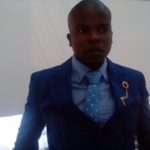 George was raised as a Christian by his parents. However,  major issue all started in 2007. George went into the closet to pray. He wanted to intercede for my brother who's surroundings was not going well. So he went before the Lord in tears with this matter, after praying l had a heavy power which came upon him and shacked him down. George has never experienced this before. The following day at same time He got also into prayer and that's where He felt the same power coming upon him. and this time was unbearable, it filled him. There George started to speak with un-none language for a time.

Since then, George had an increasing a strong desire in himself of the things of God, that he started to embark on prayer and fasting journeys into the mountains. God also visited him in an audible voice telling me how my life shall be and things to come .

Because of the hardship of life, George decided to join the Zimbabwe Republic Police as a policeman.ln, a vision at night around 2300hrs l was visited by an angel a man in white. He asked me a question." What do you want the things of the world or the things of heaven? T o worship God Almighty or continue serving as a policeman? I replied l want heavenly things and to worship God. He held my shoulder and encouraged me to be strong, there he vanished and went away.

.So my three years ended up in 2014 , then l had to resign from the police force, to save God Almighty. Then started a ministry called Home of Glory of God.

George started CLI in 2017 and has completed 11 credit hours with a 4 point GPA!