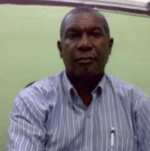 To bring revival to Jamaica!

Rutherford Gordon was born on the beautiful Island of Jamaica. His grandparents were instrumental in introducing him to the faith!

On finishing school, He entered the job market where I worked with the government until his early retirement in 2012. In the work world, He was exposed to all the ungodly stuff but all through this he still remembered my grandmother's teachings about God and visited church sometimes.

He then married my wife Valda and are the proud parents of three sons. She started to visit a church and subsequently became a member. After his retirement, Rutherford started visiting until he started to attend regularly. He gave his life to the Lord and was baptized in September 2016.