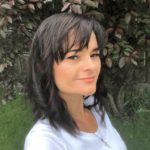 To Raise Up Revival Leaders!

Amanda has been a student with CLI since 2016 and since then she has completed 51 credit hours and earned her Deacon Ordination.

Read her Testimony Below in Amanda's own words

Hello! My name is Amanda Lopez. I was born and raised in California, USA. I grew up in a severely broken home surrounded by drug addiction, alcoholism and abuse. Throughout my teen years and into adulthood, I formed the same type of life for myself. At 18, I had my first child with a much older man who was controlling, abusive and addicted to drugs and alcohol. I too was swallowed up in getting high and becoming an alcoholic. After 3 1/2 years, I left this relationship and entered into single parenthood. For years, I went back and forth between living sober and living high. At 25, I was again in an ungodly relationship with child number two on the way. After four years of living in a clearly broken and dysfunctional relationship with no hope for peace in sight, I had to make a choice. I took my two children and moved in with my mother--whose husband and my very near and dear stepfather was passing away with cancer. After his passing, I left my mother's house and entered into yet another ungodly relationship. However, this time we got married after 3 years of living together (both completely lost to the world, drunkenness and other sin bondage). In early 2008, the Lord began to release dreams to me that directed us to start attending a nearby Southern Baptist Church where we surrendered our lives to Jesus. It was during this time that God revealed Himself to each of us in an extremely real, supernatural way! Several months later, we moved across the country with our two children to an itty-bitty town in WV where we dwelt in the Appalachian area for four years (and baby number three joined the family). We attended a small, local church within which our foundation in the Word of God was established and we entered the world of ministry.

We knew at this point that there was no other path for our lives but to serve the true and living God! No turning back!

After our time in WV was fulfilled, we moved to OH where we were called to another rural-area church. We also gained permanent custody of our niece bringing our family to a size of six! We went through many trials in our marriage and family during this time. Sadly, instead of healing from the wounds of our marriage, we distracted ourselves with ministry and helping others. We made our first mission trip to Honduras, which was eye opening on a number of levels. Most ironically, to the great need of revival in the hearts of Americans! We also moved to the Columbus, OH area to join an urban church and continue mission work within the city of Columbus--specifically to extend love and hope to broken families, those who are homeless, impoverished and drug addicted, among a multitude of other detrimental life situations. On top of that, I spearheaded the missions program at our local church, developed a 12-week missions program and led multiple teams on mission into the heart of the Navajo Nation. To watch the power of God flow through this ministry and into the Native American population was beyond words! As amazing as the Lord showed Himself during this time, there were also major setbacks in our personal lives and marriage. After years of giving all of ourselves to the work of the ministry, our marriage crumbled. We resigned from the ministry and, unfortunately, could not endure the great trials, wounds and damage that had already been done. We both backslid into sin, our marriage dissolved and I had to spend much time healing and receiving restorative ministry.

Praise God, however, His grace is sufficient to bring us through the most devastating life events!

Today I can stand and give all praise and glory and honor to the Lord more than ever before! Through every trying event of the last several years, I can say that His mighty hand has been ever-present and His love, grace, and mercy beyond expectation! I have since remarried to an amazing Christian man and we have given ourselves to growing in the Lord together, fully understanding the desperate need for Christian marriages to prioritize the FIRST ministry in the home.

My heart burns with passion for both street ministry and world missions—with a piece of deep knowledge as well for the need for reform within what we today call "mission trips." As a "missionary" called to the city of Columbus I have seen many challenges within the urban mission field—a wide variety of opposing religious beliefs (and the accompanying hostility directed toward our outreach efforts), a heroin epidemic, alongside escalating social justice issues. By the grace of God, we are able to minister truth, hope, and reconciliation in the midst of it all!

I also see a reset in the body of Christ moving in the direction of house worship, local houses of prayer and true family/community living like the early church so clearly demonstrated for us. There is a strong need for Fathers and Mothers in the faith to arise for the next generation to come forth and take their place in the kingdom--all free from religious facades and walking in pure love for one another, secure in our identities (not our titles) as sons and daughters of the Most High! The need for transparency and vulnerability is at an all-time high and I pray to be one to keep the door wide open for true fellowship in Spirit and Truth with my kingdom family.

Amanda is willing to help serve other students at CLI!