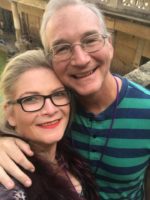 To Mentor other Christian leaders, lead the lost to the Lord, and minister to those in the UK. They believe revival is happening and they are apart of them.

Rob and Sabina got married in 2015 after President Henry introduced them. Sabina hosted President Henry when he was traveling through the UK for CLI gathering. Rob was a good friend of his in Michigan.

After they got married Rob moved to the UK to minister with Sabina there!

Read a little bit of their testimony below:

Rob: "I grew up in a traditional, mainline church, was baptized as an infant and spent over 40-years in that religious community. However, I didn't have a personal relationship with Jesus until He found me wandering in the wilderness of despair as my marriage of 19-years was crumbling, my business failing, and bankruptcy looming. To paraphrase Psalm 40, the Lord turned to me and heard my cry. He lifted me out of the pit, changed my heart, set my feet on solid ground, and put a new song in my mouth, a hymn of praise to our God!

God poured out His grace and walked with me through a painfully difficult season of life. I believe that the pain of being stripped bare and humbled, only to be rescued and restored, was to acknowledge my dependence on Him, to bring me into a closer and right relationship with Him so that I might answer His call to minister the gospel of grace to His lost and broken people. I have a passion for discipleship and leadership development."

Sabina: "Four years ago, at a very low time of my life, after a marriage break down which left me devastated, I attempted suicide, leaving me in a coma and on life support for four days, where I had a near death experience, when the Lord took me to hell and heaven, and He said with unforgiveness in my heart I would not be going to heaven. Then, the Lord showed me all those I had to forgive, He told me it was not yet my time and He had work for me to do. With my discharge from the hospital, I flew to Australia to be with very dear friends who had loved me through the troubled times of my childhood. It was there at a small Baptist church in Brisbane, after prayer for a headache, my left eye was healed. I had been totally blind for 9 years after a golf accident, and this was a miracle healing that changed my life. Ever since, I have felt a most powerful calling on my life, to be His servant and serve Him with every beat of my heart and every breath I take. It was these events, and the Lord's prompting that led me to seek ordination."

Sabina was ordained as a Commissioned Minister with the CLA in 2015. Rob has a Masters in Divinity.