To raise up anointed and well train Christian Leaders for Africa!

Christian Onyiagha is the pastor at Divine Gospel Church. He was born into a Christian home, but he was not involved with the work of the ministry until 2007. He was a Christian, but He lacked the POWER of Christianity [Holy Spirit].

In March 2007, He attended a Crusade. It was at this meeting that He received the Holy Spirit. That experience turned Him into an anointed Christian Leader.

He became aware that he needed training in the Word of God. He began studies in 2013. He began his studies. He now has over 140 credits of study complete. He has been ordained in the Christian Leaders Alliance. He is willing to help spread ministry training with ordination as possibilities in other places beyond Nigeria.

Contact him if you need a mentor for study or ordination.

To proclaim the gospel to those in Nigeria that need Christ

Ibrahim Daniel Amshi was born into a Muslim home. There were very few Christians in his village. He took interest in Christianity at a young age. He would often attend Sunday School.

When he left his village for the university, Ibrahim continued to grow as a Christian. He has studied the Bible for many years at various places online.

Ibrahim started Christian Leaders Institute in 2016. He has completed over 65 credits of ministry training. He has been ordained as a Commissioned Minister. He is willing to mentor those in his area and help them get ordained with the Christian Leaders Alliance. 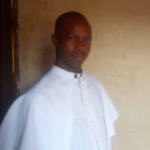 To reproduce leaders and bring revival to Nigeria!

Onyiagha is a pastor of a church. He began formal ministry training at Christian Leaders Institute in 2016 and is ordained. He has completed the Diploma of ministry.

His ministry dream is to help people to know the true way to salvation and the kingdom of God.

Samuel was born in Delta State of Nigeria in the year 1970 to the family of Edward Echiemunor. He gave his life to Jesus in the year 1985 on a crusade ground in his hometown. The Lord saved him from idol worship.

He began studies at Christian Leaders Institute in 2016 and has graduated with over 100 credits of ministry training.
He has been ordained in the Christian Leaders Alliance. He will help mentor others and guide them through the ordination process.

Temilolu Aliu confessed Jesus Christ as his personal Lord and Saviour in September 2001; that marked the beginning of his walk with God. In January 2005, He preached his first sermon and by God's grace. He has functioned in various Christian leadership and ministerial positions in Nigeria- his country of birth, and in The Philippines, where He served as a missionary.